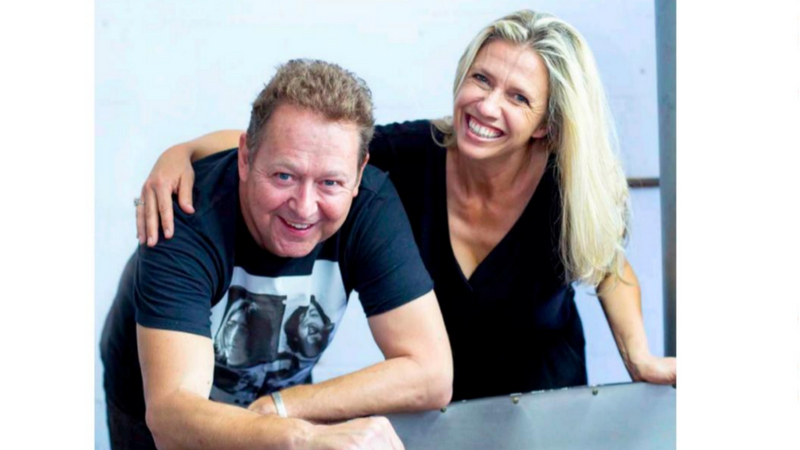 From sticky buns to sniffing beans, David and Jenny Kennedy, (known lovingly throughout the community as Mr and Mrs, Bun), share how a fascination of coffee and love at first sight evolved into a successful business and home in Byron Bay.

David reflects on how his curiosity for coffee began in 1989.

“It began after a visit to a boutique coffee roaster in Sydney in order to create a coffee blend for a new Patisserie we were opening in Glebe.  Funnily enough this is where the ‘Bun’ name evolved from also.  I was given the nickname “Sticky Bun” by friends.  They would often joke telling me I ran a “Sticky Bun” shop and I would try to correct them, “No it’s a fine French patisserie,” He laughed.

“The coffee roasting process intrigued me and I formed a friendship with the roaster.  When I exited the patisserie, the roaster asked if I would like to join their team.  I jumped at the opportunity and spent five years learning the craft, eventually becoming head roaster.

“That same year, Jenny and I visited Byron Bay for the first time.  Like so many other people, it was love at first sight.  In the mid-90’s, a dream was formed, to move to Byron Bay and roast coffee.  It took ten years but we finally arrived in 2005,” David said.

Jenny’s love of coffee came from David’s enthusiasm, and as the business evolved, her role within the business has too.

“My role at Bun has previously been part-time whilst parenting three kids, however this year I have taken on a lot more of the behind the scenes work in building our brand and business.

“From the day David first called me in 1989 to tell me he had made his first cappuccino for a paying customers, to 2004 when he announced a coffee roaster was on its way from Turkey, his enthusiasm and passion has been infectious.  Now it is our family business and we are extremely proud and grateful of his dedication,” Jenny said.

Bun Coffee produces four main blends as well as 100% Australian grown product, a decaffeinated coffee and a number of single origin coffees, all created by David.  The biggest seller is the Shade Grown Rainforest Blend.

“Because this coffee is grown in a thriving natural ecosystem, I believe it adds to the depth of flavour.  The coffee makes a stunning espresso and due to it’s brightness, produces an extremely full-flavoured milk-based coffee.  It features one of my all-time favourite single origins from Costa Rica.”

You can taste the passion in every cup, a result of David buying top-quality green beans and using his decades of experience to roast each signature blend to perfection.

Years of fierce competition in the industry made business tough initially, but David and Jenny’s greatest moment in business came recently, when they were told that Bun Coffee is the number one retail coffee brand sold in David Jones nationwide.

Follow your nose to the sweet aroma of beans, roasting in Byron’s Arts and Industrial Estate.  With both flavour and sustainability a priority, Bun Coffee is Fair Trade certified, Rainforest Alliance certified, HACCP certified and an accredited Swiss Water Process Roaster.

Discover your favourite grind and begin your breakfast with a Bun.

As seen in Byron Life Magazine.